Since 2007, several outreaches and Youth Conferences have been held in Baramati, Maharashtra. In 2007,the Outreach program touched over 4000 Youth. In 2008, there was Youth Conference conducted in Sharadanagar which was attended by 220 students. The phenomenal response from all these participants has resulted in annual feature of Baramati Youth Conference starting  2011.

It was a longstanding wish of Viral Mazumdar, which finally came true on July 28, 2007; when he visited Baramati along with six other members of the Moral Re-armament now know as Initiatives of Change (Mra-IC) youth team to spread the message of four absolute standard of Honesty, Purity, Unselfishness and Love and the power of inner voice. The youth team included Navendu Shirali from Bangalore, Dashmesh Sethi and Sonu Arora from Nagpur, Harsh Mishra from Mumbai, Abhiram Bhise from Indore, Chetas Desai from Ankleshwar—all of whom have been involved with organizing the youth conferences at Asia Plateau.

The exhaustion of long travels was nowhere to be seen as the team travelled to Baramati while discussing the plan of action for the next day. They finally arrived at 1.30 am at Malegaon Guest House, where their stay arrangements were made. Ravi Tawre, a local organizer, welcomed them with a bit of concern for the next day. It was going to be a long day with a very tight schedule and an early start. However, as the day broke, the team was ready in full zest, with prayers in their hearts and focused towards their mission to conquer the hearts and minds of young Baramatians. And they indeed achieved it!

A quick breakfast was made at Abhay Shaha's house in a nearby village of Pandare, where the local team had gathered to welcome the visiting team. It was heartening to learn the early story of Mra-IC from Anasuya Gargate, who has sown the seed of Mra-IC in Baramati. A celebration of Viralbhai's forthcoming birthday set the positive tone for the day. 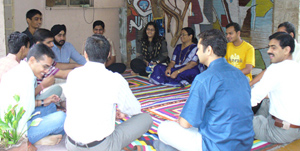 The team covered five educational institutions and spoke to over 4000 students in a span of 12 hours. The hour and a half long session at each institution commenced with a well-formulated introduction to Mra-IC by Anasuya Gargate delivered in Marathi. Viralbhai then spoke for about an hour in his convincing style, mostly narrating his own life experiences since his association with Mra-IC. He made sure that every address of his was distinct from one another so as not to make it monotonous. However, the focus remained clear: The practise of quiet time and the four absolutes and keeping aside the 'Ego' factor. Navendu, Sonu, Abhiram, Pratish Gandhi had their stories to share too. Pratish's mother specially travelled from Pune to understand what Mra-IC is and the reason was that her son had recently participated in the youth conference at Asia Plateau where there was a change in heart in her son—leaving the ego aside the son discovered himself and due to this small change one could see a larger change in the whole family. True to Mra-IC tradition of presenting songs, the young team presented 'Kaun Hai Zimmedar'. While concluding the session, Abhay bhai spoke about the concept of 'India I Care' and presented each college with the deposit slips of the Character Bank of India. Vipul Shaha then talked about how he is making a difference with his small initiative of 'Quiet India Campaign—Horn NOT OK Please', which he has started with the help of Mra youth team in Pune to promote silence on Indian roads.

The first institution that the team visited was an engineering and business college at Malegaon—7 kms. near Baramati. A cool pleasant climate allowed for an open air session. The next presentation was at Sharadabai Pawar Women's College. The hall was full with 2000 junior college girls. Their enthusiasm was evident in their smiles and claps. Each member of the visiting team received a tree sapling as a felicitation gift, which was found truly extraordinary. We promised that each of these saplings will be nurtured and cared to make them grow into a full fledged tree. In a similar manner if you will make your life based on these absolute values you will also become different and strong like a banyan tree, which can last for more than a century. Only those foundations last long if they are built and based on values. If you follow this you will make yourself different from mass to class. 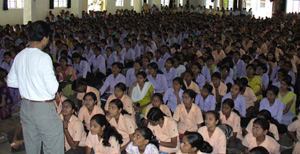 As we were talking about the relations and how EGO governs our life and does not allow us to say and express what our inner voice wants us and in the bargain we distant yourself from our own loved ones. All the while we want to express love and feelings towards our mother, father and closely held people and when we do so we enjoy inner bliss. Sneha Singi of Pune shared how her family relationships were brought closer after listening to her inner voice, an unconditional apology to her father, when she went back home the hug that she got from her father said every thing. At the end of the session young minds were inspired and with tears in their eyes all they had to say was I will change, I love my mother. The empowerment of rural young lady was evident in the kind of confidence with which she asked the questions like—'Could you please clarify the concept of purity?' This was followed by a talk to Sharadanagar Agriculture College. After a lunch hour, the team spoke to another 1000 students at Tuljaram Chaturchand College—the oldest college in Baramati. A batch of 40 students from a private institute named ICA & IMPACT had also come to attend the program. Another group of women nursery teachers from Vanashtali Rural Development Organization also joined. The students were receptive to the idea of Mra-IC and crowded us with their never ending questions. Finally, at 6.30 pm. the last session was given to Vidya Pratishthan College of Engineering. 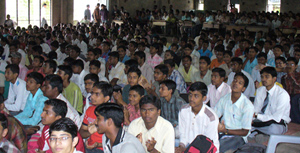 The response was so overwhelming that some students followed the team wherever it went. The team was surrounded by a group of enthusiasts after conclusion of every session. They had lots to ask—How can we get involved? How do we start? What initiatives can we take? Can you come again for a longer time? Why don't you start a youth political party? How are we going to fight the corruption…there was no end to it. It was felt by the team that rural youth was ready to absorb new things much quicker and all they needed was a right direction and channelling of their hidden energy and unseen potential.

Backed with this confidence, the team has decided to come back and hold a residential training programme for three days in Baramati early next year. The heads of various institutions have already expressed their full support for such a program. A character bank on the lines of India I Care is initiated by Abhay Shaha in his village of Pandare. The Quiet India Campaign is taken up by the Pune Mra-IC youth team. Panchgani, Pune and Baramati form an equilateral triangle in terms of time to travel to each place from other. This strategic location of Baramati certainly holds a good potential for it to develop into a more active place for Mra-IC.

The youth team stayed at Vridhhashram Baramati that evening. A review of the day's activities and outcome was taken at the knowledge and meditation hall. Every member expressed a deep sense of gratitude and learning. Anasuya Gargate expressed that a seed has been sown in every heart and only time will tell what good the Mra-IC presentation has done. A father realized the need to give more love to his family and people around him. A mother was delighted to see her children being involved in the noble work of Mra-IC and all positive changes that it has brought within the family. The visiting team made its return to Pune early on Sunday morning the next day.

All this was only possible because of unconditional contribution, commitment and willingness to do something for the youth of Baramati. Deepest gratitude to the team.

To have a look at the pictures of this program please Click Here.