Youth conference 2010 was inaugurated at 5.00pm. The inauguration was solid and witnessed by 161 participants from across the nation. It was later followed by short speeches from the past participants. They talked about the values of IofC that shaped their lives and today, whatever they are in their lives is due to their own reflection in the quiet moments.

Let's make a difference has always been the theme of the conference and how we can make a difference in our lives that will inspire us and others around us.  Change is the most practical solution and the moment I change, things around me change. With this input, morning quiet time was initiated. Every morning, disciplined quiet time was practiced. Every participant made a genuine attempt to go within and find the real I. Lots of emphases were laid on writing in quiet time as written is a permanent form of reminder. Disciplined quiet time, keeping laziness at bay everyday, pondering over the written thoughts and following it will someday help you connect to your inner voice. Thoughts are like a flowing river that cuts through the rocks not due to its force, but due to its sheer consistency so disciplined. Quiet time will help one to seek inspiration from within and exuberate outside.

The first session of the conference was, "ABC of Initiative of Change". In this session, the participants were introduced to absolute honesty, purity, love and unselfishness, the core values of IofC. Young minds felt challenged listening to the values, thinking whether it is possible to live by these values in today's time. Relevant examples were given to convince that it is very much possible to live if your foundation is strong and all through your life and that, you are going to build only good foundation if you are always connected to your inner self. Foundation cannot be decorated or painted, but it can only be made strong. Similarly, life can be crafted beautifully with good values that will last till the very end of your being. Later in the day, the participants pondered over the inputs in their own group, thinking whether it is possible to live by these standards. I am sure many will make a new beginning in their lives. 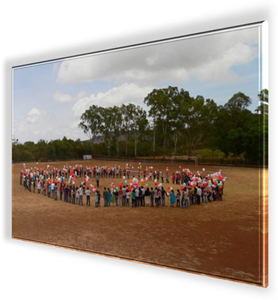 Past participant of the youth conference, Mr. Pawan Sarda has become a successful trainer in lateral thinking. He gave a different perspective to thinking and made people think creatively. Participants appreciated his session and the exercise he conducted. He was given a standing ovation for the workshop led so wonderfully.

Anshu Gupta, Founder of the NGO Goonj, spoke about the difficulties faced by Indian women in rural and financially backward areas while taking care of their personal hygiene, especially during menstrual cycles. Mr. Gupta pointed out how deprived these women are, of a small piece of cloth, all because of poverty. The women would replace the role of cloth by using plastic, sand, ash etc during their cycles. This moved Anshu and he decided to do something for the poor mass of the society. He told us how the clothes and rags which are waste to us are of great value to him, ever since he started making sanitary napkins out of those discarded pieces of cloth. Till date he has distributed more than twenty-five lakh napkins. It is a commendable work towards the down trodden people of our society.

Nachiket Thakur, working with Mahindra Composite, also the founder of Bamboo Vishwa, talked on bamboos and their uses - how they can be used as an alternative in conserving nature and protecting the environment.

One evening, we had coffee with Atul Kulkarni the cine artist. We saw some of his clippings from some of his movies and his powerful presence on the celluloid. A versatile actor who has acted in Telugu, Marathi and Hindi movies, his latest movie Natarang in Marathi - where he acts as a trans gender, was appreciated by all sections of the society.

Jaideep Verma's documentary, "Leaving home life", filmed on India's rock band Indian Ocean, was a touching experience to see and feel the struggle of young aspirants who wanted music and their band as a career. It gives hope to many young people and also teaches that perseverance pays and one will see light at the end of the tunnel. Today, the band is pride of our country.

Rajiv Agarwal enlightened participants with the session on RTI -Right To Information - and how one can gather important information pertaining to self and from the Government. Simple steps can lead to a big change, Family and relationships are the core values of survival for every society. Family is one place which has been taken for granted by most of us and deep down every evening every individual wants to return to the same family. But still we are divided within our own families. In one such session, genuine attempt was made by every individual's to unite with their families, while keeping their egos aside and looking at their true selves. This helped many young people to unburden themselves and go back to their respective families, friends and loved ones, where ego had earlier taken over love that once existed. The power of love is phenomenal and when one loves unconditionally, one experiences God. This was expressed by one of the father with tears in his eyes, saying that the best gift he had ever received on his birthday was his daughter coming back to him the way he wanted her to be, He admitted that at one point, he wanted to end his life because he felt dejected and depressed. The reason - his daughter used to make him feel worthless and failed to understand how much he loved her. This used to kill him from within. However, God took his time for a miracle to happen. One fine day, she called up her father from the youth conference. He could not believe himself. His joy knew no boundaries when his daughter came back to him.

Apart from that real life episode, I have seen many sisters and brothers shedding their egos, embracing each other for what they are and not for what they want them to be.

A young teacher with tears in her eyes, expressed how she discovered herself with a few mistakes committed as regards her behavior towards her family and how much she longed to return home, after mending her ways with her family. She added that family is the biggest gift God has given to all of us. So we must cherish it.

4th June was celebrated as Khadi day where all the coordinators had worn khadi. Later on, the Indian tri colour was hoisted with full respect.

5th June was celebrated as World Environment day. Emphasis was laid on living life based on sustainable living where one makes all the possible attempts to save natural recourses.

On 7th June, nine participants were selected and felicitated for their good conduct, punctuality, participative approach and good overall decorum throughout the conference. The day concluded with a formal evening. The dining area was lit with candles and everybody was welcomed with a toast for a successful conference. The coordinating team served all with grace and humility to make every soul feel special.

On the last day of the conference, Every participant was given gas-filled balloons. Brighter colours denoted the level of ego carried by individual and how dangerous the situation was. God has created each one of us as HIS image and in this, HE has not given us ego. But somewhere in our making we tend to gather a lot of hatred and anger, all because of EGO, which we do not really need. Through the balloon exercise, all the participants could identify the level of their respective egos and also learned that the only way to get rid of that is through prayers and corrective action. One of the participants, before releasing the balloon, asked if she could make a phone call, After she spoke to the person concerned, there was a glow on her face and she was feeling as light as a balloon. She came and hugged me. That gave me a feeling of peace within. Together we released the balloons in the air, asking for HIS intervention and taking care of the unwanted quality - ego - which only brings destruction.